A place where CAP Veterans can add their experiences to our history,
and visitors can learn about this unique program of the Vietnam War.

"We Are All Alone In Indian Country"

That was how we described it when we talked among ourselves in the 1960s. While not politically correct in the '90s, it 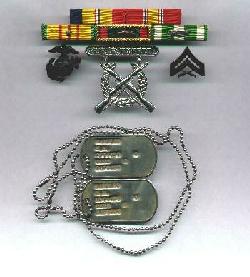 summarized how squads of Marines and Navy Corpsmen felt as they stood for the first time in 114 isolated Vietnamese villages, surrounded by jungle, booby-traps, and thousands of supposedly hostile Vietnamese civilians. They were part of the Marine Corps Combined Action Program (CAP). CAP placed a squad of Marines and one Navy Corpsman in villages from Chu Lai to the DMZ in South Vietnam from 1965 to 1971.

Images of fanatical Viet Cong pouring out of the villages, jungles, and rice paddies hovered in the mind of each of us as we hunkered down for our first night of sleep in such supposedly hostile territory. That first night each new Marine and Corpsman counted the friendly faces of a handful of Americans, then looked with mixed emotions at a poorly equipped platoon of Vietnamese Popular Forces, the local village "militia".

Each Marine or Corpsman certainly pondered the distance to the nearest American military base. Each calculated how long it would take for help to arrive. Each knew that, when needed, help would probably not arrive in time.

This web site is dedicated to those Marines, Corpsmen, Vietnamese Popular Forces, and Vietnamese villagers who became our friends, our allies, and our brothers.

Most importantly, it is dedicated to those of our number whose names now grace a granite wall in Washington, D.C.

"Vietnamese people in some of the [CAP] hamlets still, twenty five plus years after-the-fact, hold annual memorial services for the young men who died to keep them and their children free."

Perhaps the most telling feature of that policy [...conventional main-force battalions operating in free-fire zones to search out and destroy the enemy's formations], as well as an indicator of its ultimate failure, was contained in a statement to reporters in 1965 by the personification of the U.S. involvement in Vietnam, General William. C. Westmoreland. He said that as a result of U.S. strategy, the Vietnamese peasant would be confronted with three choices: he could stay close to his land (usually in a free-fire zone); he could join the Viet Cong (the target in that free-fire zone); or he could move to an area under South Vietnamese government control and become a refugee.

"Doesn't that give the villager only the choice of becoming a refugee?" one journalist inquired.

"I expect a tremendous increase in the number of refugees," Westmoreland answered.

In effect, Westmoreland had declared war against peasant society in Vietnam. In my own opinion, that is the day the United States irretrievably lost that war.

I had the good fortune to spend quite a bit of time with Dr. Jeannie. Several months prior to the reunion I had sent her a copy of the Life Magazine To Keep A Village Free edition. She used that article in her Poli Sci class at Utah State University the week of our reunion. She had looked up each member listed to see who had survived the war. She states emphatically that the Life Magazine is something she will treasure forever.

With Echo 2 fresh in her mind, one of her greatest hopes was that she would meet some of the Echo 2 Marines at the reunion. On Friday night as I was sitting with Dr. Jeannie on the bus waiting to leave for dinner, I vaguely remembered that I'd heard about a Marine named Ron Schaedel, and maybe, just maybe, he was Echo 2. Ironically, Ron was sitting just across the aisle from us on the bus.

I will never forget the look on Dr. Jeannie's face when she realized she was that close to one that she had studied so intently since receiving the Life Magazine. I almost regret not moving to another seat and letting her revel in that moment by herself!

Thank you, Dr. Jeannie. I will treasure that memory forever. As I told the CAP Veterans at the reunion when I introduced you, CAP has no greater friend than you!

The most powerful take-away from this research for me has been precisely what you outline below: that we tend to naively repeat the same patterns in new counterinsurgency locations across time. The CAP program was a break, in several important ways, with that pattern. It shows we can do things differently, better. We don't have to be victims of our own historical inertia.

The other take-away is that regardless of which counterinsurgency strategy we pursue -- including the very best bits gleaned from the CAP program -- we cannot succeed in the political endgame (typically the primary purpose of the war in the first place) without a steady and legitimate host government stepping in to provide services and connect with its people once Marines have created the security space to do so. Our counterinsurgency strategy will always rank second in importance to the ability of the resident government to inspire loyalty from its citizens. We can't create that bond for them. And it is the thing that most matters in the end.

Dr. Jeannie Johnson with Web Site Creator Tim "CAPVet" Duffie
She was proud of that tee-shirt. Wore it on the plane all the way home.

"The struggle was in the rice paddies...in and among the people, not passing through, but living among them, night and day...and joining with them in steps toward a better life long overdue."

For Those Who May Not Have Seen This On The Guestbook

Comments: I wish to offer my sincere gratitude to the men and women who fought against the Communist. I was captured by the Communist after the fall of Saigon, and spent eight years in solitary confinement, and three years in prison. I'm now proud to be an American citizen. To those service people of the Marines, Navy, Army, and Air Force who gave up their life for freedom in Vietnam, may they R.I.P.

A complete listing of CAP KIAs as submitted by Rick Schelberg, CAP 2-4-3. The following are those pages indexed in a variety of formats.